Surprises in the Grocery Store

If you're a regular here, you know I love Fooducate (the iPhone app that lets you scan products and get a score, reviews and key ingredients). Tonight as I was grocery shopping, I decided to put some of my favorites to the test and got a few surprises I thought I'd share.

Kozy Shack Chocolate Pudding—reading the ingredients, I thought it sounded better than Jell-O, since it was made with lowfat milk and only a few other ingredients, all generally recognized. On this one, I was right. It scored a B-, while Original Chocolate Jell-O Pudding scored a C-. I also checked out the Kozy Shack Tapioca, which was a little surprising, only a C+, because it had more sugar (and more calories per serving). Still not terrible for an occasional treat.

Boca Burgers. While I realize some people are not soy supporters (as food anyway), the Original Boca Burger is one of the few meatless burgers that tastes good and doesn't have a nasty consistency. So while trying to really watch my caloric intake (spring training for my June beach trip), I thought one would make a nice, quick, high-protein meal. Indeed, it scored a B+, Best in Category, but Fooducate also noted that they contain MSG or equivalent. That's a nonstarter for me, as it's a migraine trigger. Bummed to cross that one off the list. 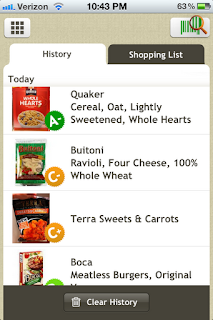 Terra Sweets & Carrots and Sweets & Beets. The Terra chips have always been a favorite of mine, and I thought they were "better" since they were cut from sweet potatoes and other fibrous starches. Both scored great reviews but only C+ because Fooducate deems chips and puffs as having too "little nutritional value for the amount of fat and sodium they carry." I get that, but in moderation, I think these are a good choice and very satisfying for a crunchy, salty snack. Probably too harsh a rating.

Buitoni 100% Whole Wheat Four Cheese Ravioli. My kids love these, as well as the whole wheat tortellini and I thought they were getting something reasonably wholesome. Then I scanned it into Fooducate for my rude awakening. The C- score is for many good reasons, the first four being: contains trans-fats even though the label says "0"; it's not actually 100% whole grain; contains MSG or equivalent; and has more than 25% of the daily recommended sodium intake. What!?! This one kind of pisses me off. No more Buitoni anything for me. Lesson on this one: it's got more than 35 ingredients. That should've been a huge red flag that I missed.

Quaker Whole Hearts, Lightly Sweetened Cereal. I scanned this, expecting to see a C or so. I was pleasantly surprised to see it was an A-. However it contains BHT, a preservative, which is another migraine trigger for me. Bummer. In this case, Cheerios are a better alternative, with the same score, but no preservatives. Not Honey Nut Cheerios (those are a B- because of the 2.5T of sugar per serving) or Frosted Cheerios (also B-) or Fruity Cheerios (C) or Vanilla Yogurt Burst (C+) or Banana Nut (C+). Who knew there were so many varieties of Cheerios? Of course, you'd expect an organic variety such as Trader Joe's Organic High Fiber O's would be higher, but no, because there's more sugar in them (2.5 tsp). TJ's O's Toasted Whole Grain Oats are actually a better choice, though both are rated A-, because they're lower in sugar. So many choices. If only Trader Joe's weren't an hour away!

Lastly peanut butter. I'm sure you expect me to buy one of those organic, low-sodium, oil-separated varieties. I used to buy it at Costco, but when they discontinued it, I took another look at Jif. I always loved its taste and had tired of trying to mix the oil back into the hard rock of peanutty goodness with the natural brands. Regular Creamy Jif is not so great (C+) thanks to its fully hydrogenated oil. Reduced Fat Jif fares even worse with a C. However, Simply Jif Creamy and Jif Creamy Natural are both Bs, even though Simply again contains hydrogenated oil. Confusing! Since I'm choosy, I choose Jif Natural, which tastes great and is just peanuts, sugar, palm oil and 2% or less of salt and molasses.

What products do you love or hate based on closer inspection of ingredients? I especially love to hear about great tasting products that are also super healthy. 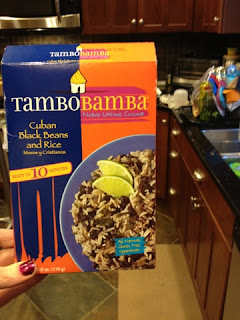 Tonight, I grabbed a box of Cuban black beans and rice, from a brand called TamboBamba. It's "ready in 10 minutes" and the ingredients are super simple (rice, black beans, onion, bell pepper, salt, garlic, vinegar, tomato, spices). It's "gluten-free, no preservatives, no artificial ingredients and no MSG." But is it tasty?

Let's just say that Timmy had fourths! It was delicious. Easy to make, even for a busy mom with kids distracting me during cooking. And just the right amount of seasoning that my kids would still eat it and we liked it without "spicing it up."

Four thumbs up for this one. And it gets a solid "A" from Fooducate, which I'm learning is uncommon for processed foods. 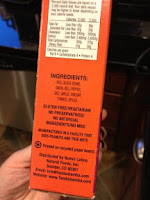 Before you ask where I got it, I must admit I am not sure. I've shopped at Giant, Wegman's, Trader Joe's, Weis, Karns, Fairway and Costco in the past month. I'll try to do some research and report back. The website is www.tambobamba.com.

Let me know how you like it if you try it.
No comments: 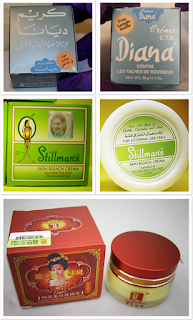 My dear friend Amy pointed out this article on MSNBC, which drew attention to an FDA report on mercury in skin-lightening products. If you are not aware, mercury is very toxic and accumulates in the body over time, causing some nasty health issues.

The FDA brief starts with:
Federal health officials are warning consumers not to use skin creams, beauty and antiseptic soaps, or lotions that might contain mercury.

The products are marketed as skin lighteners and anti-aging treatments that remove age spots, freckles, blemishes and wrinkles, says Gary Coody, national health fraud coordinator in the Food and Drug Administration’s Office of Regulatory Affairs. Adolescents also may use these products as acne treatments, adds Coody. Products with this toxic metal have been found in at least seven states.

The products are manufactured abroad and sold illegally in the United States—often in shops in Latino, Asian, African or Middle Eastern neighborhoods and online. Consumers may also have bought them in another country and brought them back to the U.S. for personal use.

“If you have a product that matches these descriptions (and others listed below), stop using it immediately,” says Coody.

“Even though these products are promoted as cosmetics, they also may be unapproved new drugs under the law,” says Linda Katz, M.D., director of FDA’s Office of Cosmetics and Colors. FDA does not allow mercury in drugs or in cosmetics, except under very specific conditions, which these products do not meet.

That last part caught my attention. So just what uses *are* acceptable for toxic mercury to be in drugs or cosmetics? I spent about 15 minutes trying to search the FDA site for this information to no avail, but I did come across a terrifying report from 2002 on Phthalates. That's next up.
1 comment:

Still Not Wowed by GoodGuide

At some point, I wanted to test out GoodGuide so I set up its Purchase Analyzer with my Amazon account. It's been so long, I'd honestly forgotten about it, but finally, today, I got an email from GoodGuide as follows:

According to the GoodGuide Purchase Analyzer, you purchased this product:
122126 California Baby Bubble Bath - Super Sensitive, 13 oz (Pack of 2) - Purchased from Amazon

This product fails your Pollution filter because the company that manufactures it does not have significant programs in place to address air, water and waste emissions.

However, we found this alternative that passes all your filters. You should check it out!
123794 Mustela Multi-Sensory Bubble Bath [with a link to buy it on Amazon]

Note: This message is not sponsored. The recommendation is based on your purchase history and the issues you flagged as important.

Not sure why this just popped up today, since I have not purchased the kids' bubble bath for ages. It's really interesting because we are out of bubble bath and I was looking for some at Rite Aid today (to no avail; only mass brands were stocked). They clearly can't be related, since I didn't use my GoodGuide app in the store and I didn't purchase any bubble bath, but I digress.

I have looked at Mustela products before. Initially, I assumed they were "better" because they were made in the EU. However, they do not fare well in the EWG Skin Deep Database, which is the best resource I know of to evaluate products for toxicity. Mustela products are highly perfumed, and that is reason enough for me not to consider using them for my children. But, since GoodGuide was so emphatic and the have sophisticated analytics working for my benefit, I felt compelled to check it out.

I could be wrong, but I am pretty darn sure that I prioritized the toxicity of a product as my #1 concern in my personal GoodGuide profile. I mean, this is clearly my obsession. The fact that they do not have "significant programs in place to address air, water and waste emissions" is less than ideal, but certainly not important enough for me to jeopardize my kids' health.

I logged in to GoodGuide to see what other wisdom could be imparted and found that of my Amazon purchases, 33 passed my filter and 18 did not.

Some that passed:
Some that did not:
I'm not hating on GoodGuide; I just had such high hopes for them and they're not living up. I'm going to keep buying my California Baby Bubble Bath, unless I find something with a "0" or "1" rating that is cheaper and/or better.

Has anyone else tried the Purchase Analyzer? Do tell!
2 comments: