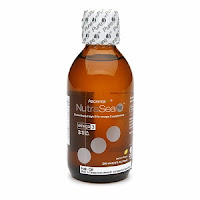 Gregory was only two when we realized he was having some neurological difficulties, and our pediatrician cited growing research supporting supplementation with high-EPA fish oil. Since then, we've tried a few options; Ascenta NutraSea hp Concentrated high EPA omega-3 lemon flavor liquid is the best I've found.

First, we tried Omega Brite, which had an orange flavor that Gregory didn't mind mixed with juice. However, he was using sippy cups at the time and it would sometimes leak, resulting in a stubborn orange oily stain. Not good. It was also only available online and frequently out of stock. Oh, and it was pricey, as most good fish oil supplements are.

When we would run out of Omega Brite, I'd buy Nordic Naturals gel capsules, which we'd have to puncture and squeeze into his "vitamin juice." That was less than ideal.

High-EPA is the key for brain function and it's hard to find liquid that has enough concentrated EPA in it. The NutraSea liquid has a total of 2300 mg of Omega-3s, including 1500 mg of EPA and 500 mg of DHA in a single teaspoon! We dose Gregory with 1 tsp twice a day, at the doctor's direction.

He used to fight us on drinking the Omega Brite but he never fights us on the NutraSea, presumably because it has no discernible taste in juice. He especially likes it in apple cider.

Now that we have G on such a good regimen, maybe Alex and I will get better about taking our own fish oil supplements!
No comments: