I was in CVS, looking for something entirely different, when I saw the displays for this Unreal Candy. I took a closer look and decided it would make for a perfect blog post; plus, I was hungry.

So I bought two varieties: "Unreal 54 Candy Coated Chocolates with Peanuts" and "Unreal 77 Peanut Butter Cups." With my CVS card, they were only 44¢ each, just over a penny per gram.

I brought them home and asked Alex to help me test them. He was happy to help, naturally. We both agreed through an entirely unscientific taste test that both were good, a little less sweet, but still satisfying. Alex felt that the peanut butter cup was more chewy, or moist, than a Reese's. I noticed that it was a little thinner than a standard size Reese's. I'm not sure I can say that I like them better than Reese's but I've stopped eating those because they have TBHQ (a preservative) in them, one of my migraine triggers. The 54s were definitely better than any other peanut butter cups I've tried, like the little Costco ones or Wolfgang's. And the M&M knockoffs were really very peanutty and flavorful. The shell is nice and crunchy, as you'd expect. 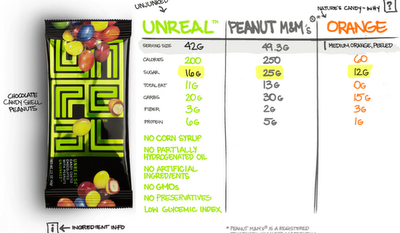 Healthwise, they are *better* than traditional junky candy bars in several ways (you can read the whole story of the brand here):
Doing a similar comparison to the one above that I pulled from their site, but with the peanut butter cups, you can see the benefit of trading in your Reese's for a "real" treat: 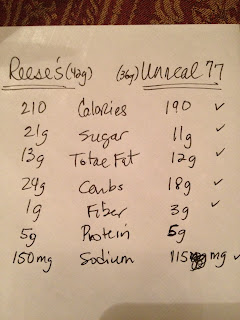 The biggest eye-openers for me—almost half the sugar, three times the fiber and 25% less sodium. All good stuff.

Unreal has five candies on the market currently. In addition to the two we reviewed, they offer
Please check these out and let me know if you like them. I would be interested in hearing others' thoughts.

Personally, I hope they shake up the candy bar industry a bit. All that unnecessary junk is getting stale. :)
No comments: