While Sean and I have enjoyed many a heated debate over politics, candidates and the Constitution, I so appreciated this gem he submitted to a newspaper in California. I thought you'd like it, too. Please share your comments here or on Facebook. Thanks for reading! 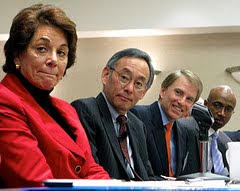 The unabated hemorrhaging of oil in the Gulf of Mexico should be a teachable moment for Americans of all political stripes, as it reveals a hole in government policy just as gaping and destructive as BP’s unpluggable hole a mile under the sea.

The risks of such a catastrophe were not unknown. It is precisely with the Exxon Valdez spill in our collective consciousness that a decades-long debate has been raging between opponents and supporters of offshore drilling.  In the 2008 election, the McCain campaign took a flagrantly pro-oil stance, with “Drill, baby, drill!” while the Obama camp remained demurely noncommittal, leaving it to the public´s imagination as to where the Democratic Party really stood.

But by early 2010, Obama had finally pinned himself to a position, supporting offshore drilling and nuclear power as legitimate concessions to his political rivals in return for bipartisan support of green-energy initiatives. Now, in the wake of the BP disaster, Obama has reversed himself, joining dozens of hitherto pro-drilling senators and governors who have suddenly begun clamoring for a moratorium on offshore drilling.

Policy requires leaders to show courage and to take the political risk of holding to a position precisely because the issue has an enduring ethical importance which overrides any short-term political gains that compromise might bring. Were it not for sound and consistent government policy on issues of public safety and environmental stewardship, we would not even have an Environmental Protection Agency (EPA), or a Food & Drug Administration (FDA), or an Occupational Safety and Health Administration (OSHA). But these agencies are only as effective as each presidential administration allows them to be, and we have seen under both Bush and Obama the relative inability of the SEC to regulate markets, or of the EPA to adequately protect the environment, or of the Minerals Management Service to properly oversee offshore drilling operations.

Populism –  swaying to the winds of public opinion and compromising beliefs in order to win favor –  leads to incoherent and contradictory positions which undermine true leadership. When times are good, populism is sweet ambrosia. But at the first hint of crisis, populism quickly turns to kryptonite. Already, Obama is beginning to pay the cost of his populism, in terms of falling poll numbers and lost political capital. But the damage to Obama’s popularity pales in comparison with the real-world effects on the people of the gulf, or the ecological devastation of the ocean itself and the long-term consequences for the global biosphere.

If the BP oil catastrophe teaches us anything, it is that the Obama Administration’s green policies are focused on greenbacks for oil execs, not a green environment for the People. Maybe it is time for us to stop “hoping” for change from well-oiled Democrats and instead start supporting real change by voting for a party which treats environmental protection not as a political football, but as a central plank in its official platform:

America’s energy security, not to mention the future livability of the planet, depends on making a dramatic transition to renewable forms of energy. But with the Big Oil corporate power duopoly maintained by Democrats and Republicans, America’s timely transition to a green economy looks increasingly unlikely.

Against this grim tableau, how is it that the Green Party, with its core platforms of environmentalism, sustainable growth, civil rights, and social justice, remains, in the eyes of many Americans, a minor third party? In fact, the Green Party can no longer be considered a third party. On the major issues facing us in the 21st Century, the Green Party is the first and only party for a new era of American peace and prosperity.